Drone maker looking to build in US

DJI, the world's largest drone maker, rebutted US lawmakers' data security concerns about the company's products on Monday, saying it does not collect or share customer data. The company also unveiled plans to start assembling drones in the United States. 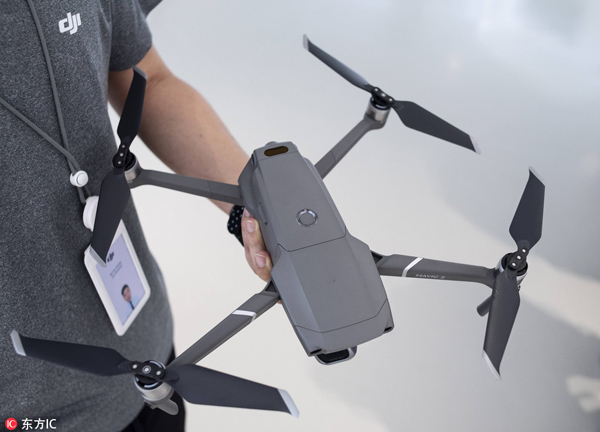 DJI wants to use a warehouse it owns in Cerritos, California, to assemble its Mavic 2 Enterprise Dual drones, hoping the move will make it easier for some US government agencies to make purchases.

If the drones are made there, they would qualify for sale to the government under the US Trade Agreements Act, which requires government agencies to purchase US-made products in certain categories, Reuters reported.

"This new investment will expand DJI's footprint in the US so we can better serve our customers, create US jobs, and strengthen the US drone economy," the company told Reuters in a statement.

DJI's latest move came about a week after the company became a target of some US lawmakers and security experts over data security, particularly during a US Senate committee hearing on drone security.

In May, the Department of Homeland Security sent out a warning about data security issues related to Chinese drones.

In a hearing of the Senate Committee on Commerce, Science and Transportation last week, several security experts acknowledged the cost-effectiveness of DJI, the good quality of its products and their prevalence in the US market, but addressed the "potential security risk" of foreign-made systems.

Harry Wingo, a faculty member at the National Defense University, associated "unique risk" with DJI being a Chinese company.

DJI, headquartered in Shenzhen, Guangdong province, called the claims against it "unsubstantiated speculation and inaccurate information" that will "put the entire US drone industry at risk" in a letter it sent Monday to the Senate committee.

Some witnesses in the hearing "want to limit competition, innovation and the availability of drone technology based solely on its country of origin", the company added.

DJI told the committee that it does not automatically send flight data anywhere, including China, or automatically transmit photos or videos over the internet, which was one of the major claims against DJI by several experts during the hearing.

The company explained that the data stays solely in the drone and on the pilot's mobile device.

DJI "does not sell or monetize customer data", it added. Pilots can disconnect their devices, and when they do choose to share their data, it is "only uploaded to US cloud servers", the letter said.

Looking to reinforce its commitment to data security, the company launched on Monday the DJI Government Edition, a comprehensive drone system designed for high-security situations.

The system would ensure that data is stored only on its devices and disables internet connections permanently, ruling out the possibility of third parties accessing the data, DJI said in a statement.

"This is our most secure drone system and is designed to meet the US government's rigorous security expectations," the company said in its letter to the Senate.

DJI said it has been working with the US Department of the Interior since 2017 to develop the new system.

Experts who testified at last week's hearing identified DJI as a leading company in the US market, to the point that the US is "overly reliant" on it.

Wingo noted that DJI's market share may exceed 80 percent in the US and said "the glaring gap between US and Chinese companies like DJI in the (unmanned aerial systems) platform market" is a "wake-up call".

On June 10, US President Donald Trump said in a memo that "the domestic production capability for small unmanned aerial systems is essential to the national defense".

Several US government branches have stopped using DJI's products. The US military stopped using DJI drones in 2017, and the Senate Armed Services Committee agreed to a provision banning future Pentagon purchases of Chinese-made drones. DJI is still the preferred choice of state and local public safety agencies, the company stated in the letter, in which it noted how it has helped police in New York and California.

The letter said DJI has been assisting US businesses and government agencies, creating value for the US economy and promoting safety. The company estimated that it has driven $1 billion in US economic activity with its US partners.