The government of Shanghai is sewing up a plan for the introduction of artificial intelligence in a variety of fields, as part of the metropolis' efforts to pioneer the nation's AI drive. 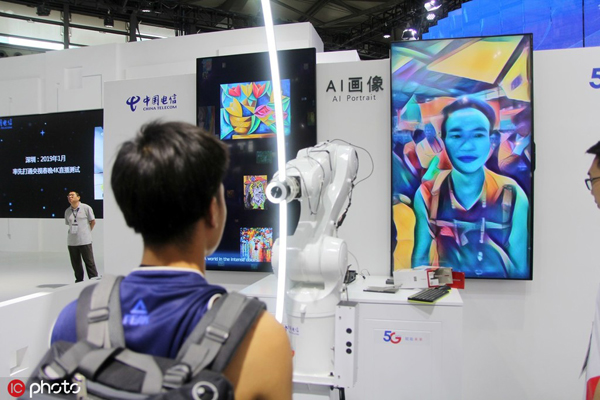 In mid-June, it announced its plan at a news conference. The decision is among a batch of moves to make the AI industry a driver of economic growth.

Shanghai's AI ambition is best exemplified by the formation in May of the nation's first pilot zone for the innovation and application of this cutting-edge technology.

The dedicated area, approved by the Ministry of Industry and Information Technology, has set for itself three main goals: one, to establish an AI core industrial cluster; two, to promote AI applications; and three, to build a supporting system for AI innovation, according to the Shanghai Commission of Economy and Informatization.

A series of mechanisms and facilities are in place to bolster the goals. Last week, the city unveiled its first dedicated AI incubator, serving as an accelerator to turn abstract AI ideas into prototypes and later into potentially tangible products.

Backed by the SCEI, the facility will provide working space, data bases, technical support, financing and resources matchmaking with application scenarios. Such a model will be duplicated across the city in due time, according to the commission's chief engineer Zhang Ying.

Five AI startups have signed agreements with the first AI space, covering new areas that arose from the combination of AI and medical care, education and big data.

The incubator's launch last week coincided with the city's announcement of a series of awards. Dubbed SAIL and dedicated to an AI-themed contest, the award winners will be announced ahead of the 2019 World Artificial Intelligence Conference in August.

"The SAIL awards are not only an influential part of the WAIC competition, but an important carrier in the integration of industries, universities, research and applications in the field of AI," said Zhang.

Formed at the end of April, the 22-member bloc summons leading AI enterprises ranging from domestic internet giants such as Alibaba, Tencent and Baidu to international powerhouses such as the Microsoft Asia Research Center (Shanghai) and ABB, a Swiss conglomerate that also specializes in robotics and automation technology.

Once operational, the alliance will provide resources matchmaking for participating enterprises, an essential step toward fostering AI's development, given the rich application scenarios available in the city, said Zhang Hongtao, who oversees the AI unit at the SCEI.

AI specialists like SenseTime are taking such initiatives as combining AI with art. By teaming up with the Museum of Contemporary Art Shanghai, SenseTime is advocating the use of art and paintings to explain its indigenous facial recognition, data visualization and other AI techniques used in artistic painting and graffiti.

Following the announcement of the alliance, the city has unveiled the first batch of 12 AI pilot scenarios, where local authorities have advocated that AI be leveraged to power various industries.

These included using AI in teaching, medical diagnosis, cargo transportation, financial and civic services among others, said Zhang of the SCEI.

To keep the momentum going, Shanghai has decided to solicit the second batch of AI best-practice solutions in 10 key areas including medical care, education, city management, culture, and tourism, she said.