Visionox Co Ltd, a leading Chinese manufacturer of organic light-emitting diode or OLED screens, is accelerating its expansion in smartphones, wearable devices, vehicle-mounted systems and intelligent homes due to the surging demand for flexible display screens. 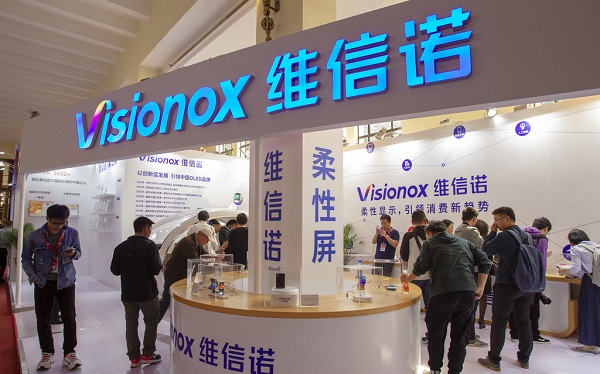 "With the development of 5G, big data and cloud computing, the display panels will change peoples' lifestyles and enhance the visual experience," said Xu Fengying, vice-president of Visionox, adding that cutting-edge technologies will stimulate applications for flexible screens.

"The OLED industry is growing very rapidly. Visionox will focus on independent innovation and team with other companies in the industrial chain to produce flexible products," Xu added.

AMOLEDs are more flexible with a faster response and have high contrast and wide visual angles when compared to traditional liquid crystal displays or LCD panels.

The company has also offered AMOLED screens for ZTE Corp's first 5G flagship smartphone, the ZTE Axon 10 Pro, which was launched in May.

The firm currently has about 6,000 OLED patents. It grew out of the OLED project team of Tsinghua University and has been in the sector for more than two decades. It has two sixth-generation flexible AMOLED display screen production lines in Gu'an, Hebei province, and Hefei in Anhui province.

Its AMOLED display screen production line in Gu'an went into operation last year. It can turn out 30,000 glass substrates (1,500 mm by 1,850 mm) every month, and meet the high-end, foldable screen demand for 90 million smartphones.

Visionox started building its second flexible AMOLED production line in Hefei in December. It also has a monthly capacity of 30,000 substrates.

South Korean companies such as Samsung and LG account for the majority of that revenue, but experts said more Chinese companies are entering the market.

BOE Technology Group Co Ltd is challenging the dominance of South Korean companies after investing heavily in the sector.

The Beijing-based supplier of semiconductor display products now has three sixth-generation flexible AMOLED production lines. It started mass production of the panels from its facility in Chengdu, Sichuan province, in October 2017.

The panels are being used by more than 10 smartphone manufacturers such as Huawei, Oppo, Vivo, Xiaomi, ZTE and Nubia. The company's second line in Mianyang, Sichuan province, started mass production on Monday. Work on the third facility began in Chongqing last year.

"AMOLED technology is the future trend for smartphone panels," Zhang said. "At the moment, technological upgrades of display panels on smartphones concentrate on appearance, function and image quality."

Spurred by growing demand, shipments of foldable AMOLED panels are expected to reach 50 million units by 2025 for the first time since their launch in 2018, global consultancy IHS Markit said.

Wang said AMOLED technology will be very important for smartphone panels in the next few years and its future prospects are promising, while adding the flexible display technology will play a vital role in the small-and medium-sized display sector.