Company's factory in Guangzhou will be able to produce 60,000 panels per month

A production plant of South Korea's LG Display Co Ltd, one of the world's biggest manufacturers of digital display products, will be completed on Aug 29 in Guangzhou, capital of Guangdong province. The plant will be able to manufacture 60,000 OLED (organic light emitting diode) panels per month. 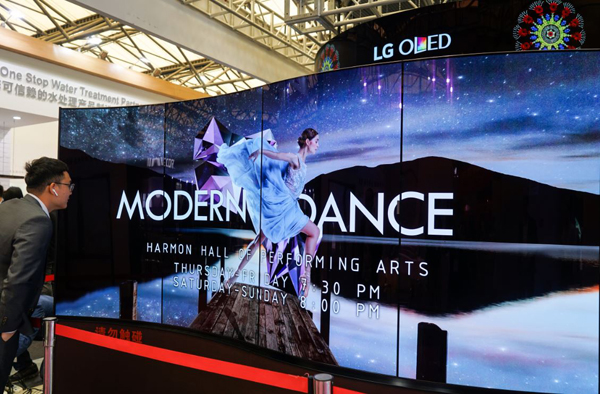 The South Korean display maker said the panels will be used for large-sized OLED televisions. The company will manufacture a total of 130,000 OLED panels, which is nearly double the current 70,000 panels per month churned out at its Gen 8.5 OLED production facility in Paju, South Korea, once the plant in Guangzhou starts mass production.

LG Display is the only company capable of mass producing large-sized OLED screens globally. The new factory will be the company's first overseas OLED plant and its second production line in Guangzhou. Its first liquid crystal display (LCD) panel production line went into operation in 2014.

The company announced in December 2017 that it received approval from South Korea's trade ministry for its plans to build a $4.7 billion OLED plant in Guangzhou, to cater to rising demand and cement its lead in the growing market.

OLED is a relatively new technology and part of recent innovations in display panels. It has a fast response rate, wide viewing angles, high-contrast images and richer colors. It is much thinner and more flexible than traditional LCD display panels.

TV maker Skyworth Group is banking on such cutting-edge and innovative OLED technology to conquer the domestic TV market. It has been producing OLED TVs in partnership with LG Display since 2013.

Data from market consultancy All View Cloud, or AVC, showed sales of Skyworth OLED TVs accounted for 46 percent of total OLED sales in the Chinese market in 2017, followed by LG with 16 percent and Sony at 14.9 percent.

In addition, China's BOE Technology Group Co Ltd has invested heavily to ramp up its OLED production in recent years.

Dong noted that almost all of the large-sized OLED panels are provided by LG Display, and the new plant in Guangzhou will help the display maker slash production costs and gain an upper hand in the Chinese market.

According to AVC, TV sales reached 22 million units nationwide in the first half of this year, down 2.7 percent compared with the same period last year, and related sales revenue totaled 64 billion yuan ($9.3 billion), a fall of 11.8 percent year-on-year.