The commercialization of Chinese robotics industry is no longer on the drawing board as a wide range of emerging industries unveiled plans for accelerated application of robots recently, industry insiders said. 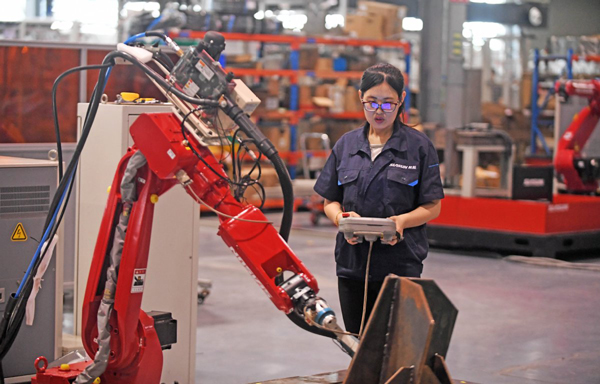 Xin Guobin, vice-minister of industry and information technology, said a wide range of new robotic forms have emerged in the country, on the back of breakthroughs in crucial technologies and declining production costs.

"In the future, robots will no longer just be tools to boost productivity but advanced, smart assistants to humans, to drive a new era of intelligent transformation," Xin said.

According to a latest report on robotics industry development, Chinese robotics segment has witnessed companies ramping up efforts to develop robots designed for new application scenarios, both in industrial areas and service-oriented niches.

Quicktron, a Chinese intelligent warehouse robot firm, is a shining example. At the World Artificial Intelligence Conference in Shanghai in August, it announced a cooperation agreement with the Baoshan government of Shanghai to build an industrial park for intelligent robots.

The industrial park will leverage technologies including AI and the superfast 5G technology to accelerate the research and development of intelligent robots. It will also test different scenarios to enrich the applications of such robots.

By enabling robots to pick and deliver goods in the warehouses, Quicktron has offered its services to more than 20 leaders in the field from 15 countries and regions, including China Post, DHL and Chinese vehicle-maker FAW Group.

It has also helped Cainiao, Alibaba Group Holding Ltd's logistics offshoot, to establish an intelligent warehouse of over 30,000 square meters with nearly 1,000 intelligent robots operating in it.

Founded by Alibaba and a group of logistics companies, Cainiao is different in that it operates a proprietary logistics information platform that links a network of providers, warehouses and distribution centers. It incorporates different technologies to improve efficiency and save on costs.

"Such cooperation will propel certain technologies including artificial intelligence to the forefront, and out of the laboratory, to be applied in a variety of industries," said Yang Wei, founder of Quicktron.

Yang said the intelligent warehouse robots point directly to the bottleneck that logistics firms have faced and with such robots, the logistics industrial chain will become more flexible and smart.

"Since the robotics industry has been lifted to a new high in the nation, Chinese companies have made breakthroughs to leverage technologies to solve real-life problems," said Huai Jinpeng, an academic with the Chinese Academy of Sciences.

With the faster-than-expected pace of robots designed for new application scenarios, the market size of the country's robotics sector is expected to hit $8.68 billion this year, which will make up for about 30 percent of the global robotics market, said the Chinese Institute of Electronics in a report.

Though faced with stiff competition from foreign rivals such as ABB Group of Switzerland, the production of industrial robots in China still hit 59,000 units in the first half of this year, up 52 percent year-on-year.