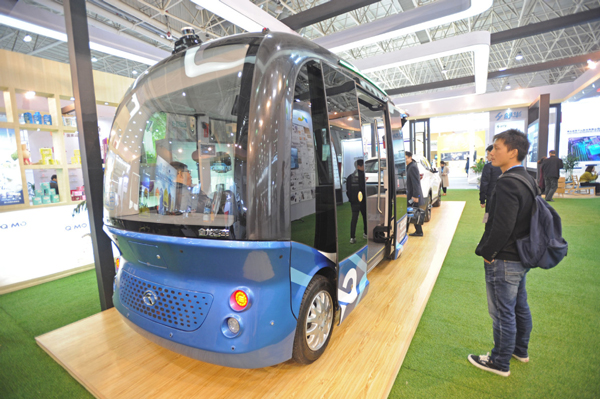 The permits were issued by the traffic authority in Wuhan, in Central China's Hubei province on Sunday. They will allow companies to conduct tests with passengers on 28 kilometers of public roads and carry out commercial operations at the city's new demonstration zone.

The demonstration zone is the country's first autopilot area covered with a fifth-generation wireless network and the V2X(vehicle-to-everything) cooperative vehicle infrastructure system. The zone is also home to around 40 car companies.

In July, Baidu obtained the first batch of testing licenses for its L4 self-driving vehicles. Level 4 autonomy means the car can drive itself in most conditions without a human driver. Mass production of the passenger cars will begin in 2020, the company said.

Shenzhen-based mobility startup Haylion launched its Alphaba smart bus in December 2017 and joined hands with the Shenzhen Bus Group to test the technology on public streets.

Shanghai-headquartered artificial intelligence startup DeepBlue Tech has released its autonomous Panda Bus and is now expanding into overseas markets, especially those in Europe, the Middle East and Southeast Asia.

As of the end of April, the country has now issued 109 license plates for self-driving vehicles, which are owned by 35 companies in 16 cities across the nation, said the China Automotive Information Net. Baidu has obtained the biggest number with more than 50 plates.

Officials have high hopes for the market. China expects vehicles with some autonomous functions to account for half of new vehicles sold in the nation by 2020, according to a guideline released by the National Development and Reform Commission.

In April 2018, the nation released a national guideline on road tests for self-driving vehicles.

Consultancy Roland Berger said China is accelerating its development of autonomous driving and is expected to become a leader in the technology, which is seen as key to the future of the automotive industry.

The Shanghai authority issued the first batch of intelligent-connected vehicle application demonstration licenses during the 2019 World Autonomous Vehicle Ecosystem Conference held from Sept 16 to 17 in the city. SAIC Motor, BMW and Didi Chuxing became the country's first three companies to obtain the licenses.

Experts have warned, however, that firms should proceed cautiously, especially when it comes to people's safety.

"Intelligent vehicles with fully autonomous functions may account for 10 percent of the new vehicles in 2020," said Yang Diange, dean of the Automobile Engineering Department at Tsinghua University, estimating that "self-driving vehicles will become part of our daily lives in 2030".