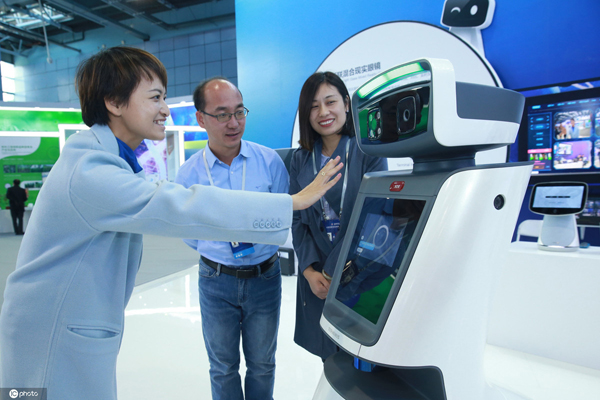 Mukhisa Kituyi, secretary-general of the United Nations Conference on Trade and Development, said that China has gained momentum in AI innovation, shown by the fact that around 70 percent of AI patent applications worldwide come from China and the United States.

"Forefront technology is now assisting human beings with some easy work and will have a far bigger impact in the future. We hope that more economies and groups can be involved to share this huge benefit," he said during a parallel session at the second China International Import Expo, which kicked off on Tuesday in Shanghai.

In Hong Kong, for instance, the fast growing technology has accelerated the growth of fintech in the international financial center, she noted.

"We have issued eight virtual banking licenses over the past year and rolled out what we called a fast payment system, which now handles on average 144,000 transitions amounting to over HK$2 billion ($255 million) every day," she noted.

Their remarks came as the nation has unveiled a national development plan to build a 1 trillion yuan AI core industry by 2030, which is expected to stimulate as much as 10 trillion yuan in related businesses.

A report by consultancy firm PricewaterhouseCoopers forecast that AI will contribute $15.7 trillion to the global economy in 2030 and China will be among the biggest beneficiaries, with a 26 percent boost to its GDP by 2030.

Currently, AI companies from home and abroad are working closely with the government to accelerate the commercialization of AI in the country, with substantial outcomes in the automobile, robotics, healthcare and other sectors.

Robyn M. Denholm, chairman of the board of Tesla, disclosed at the conference that Tesla's gigafactory has started trial production of Model 3 and is likely to put it into full production by the end of this year.

"We are working with local government to get unmanned certifications and hope (to finish that) by the end of this year," she said.

The firm said earlier that it is already producing entire vehicles on a trial basis ahead of schedule - from body and paint to general assembly - which are about 65 percent cheaper to build than at the Model 3 production facility in the US.