Huawei Technologies Co on Monday made a big push in the internet of things sector with a new premium tablet that can boost productivity of consumers. 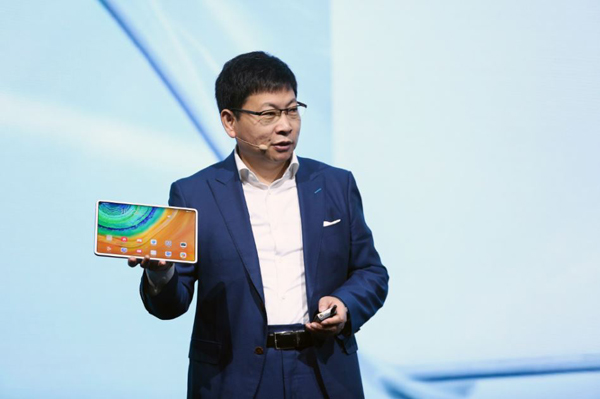 The move came as Huawei outgrew Apple Inc to become the largest vendor of tablets in China in the third quarter of this year.

Yu Chengdong, CEO of Huawei's consumer business group, said the company is leveraging technological revolution to inject bigger value into tablets, which are increasingly used by enterprises and students to help with their work and studies.

"We are transferring the technological edge of our Mate computers to the new tablet MatePad Pro. Our biggest advantage lies in software that can support multi-device interactions," Yu said.

Priced from 3,299 yuan ($469) in China, MatePad Pro comes with a pen and has a strong computing performance. The 5G version of MatePad Pro will be available in the first quarter of next year.

The move came after Huawei posted a 24.4 percent year-on-year growth in domestic tablet shipments in the third quarter of this year, grabbing a market share of 37.4 percent, according to data from market research company International Data Corp.

The numbers eclipsed Apple, which had been long-term champion of tablets in China. But in the third quarter, the US tech giant secured only a 12.2 percent growth in tablets from a year earlier, and accounted for 33.8 percent of the China market, IDC said.

The product launch is also part of broader efforts by Huawei to further enrich its non-smartphone consumer businesses, which will account for an increasingly bigger share of the company's revenue in the future, Yu said.

The company has already shipped more than 7 million units of Mate 30 series, its latest smartphone model in just 60 days. "If not for the US government restrictions, we are likely to be the largest smartphone vendor this year," Yu said.

According to him, before Washington slapped a ban on it, the Shenzhen-based company saw faster growth in overseas markets than in the domestic market. "Many said that we are driven forward by patriotic buying, but obviously, that was not the case in overseas markets. We win foreign consumers through product quality and good experiences," Yu said.