BOE doubles down on OLED displays

BOE Technology Group Co Ltd, a leading Chinese supplier of display products and solutions, is doubling down on flexible screens mainly used for smartphones, as well as expanding its presence in internet of things, intelligent retail, vehicle-mounted systems and other emerging industries. 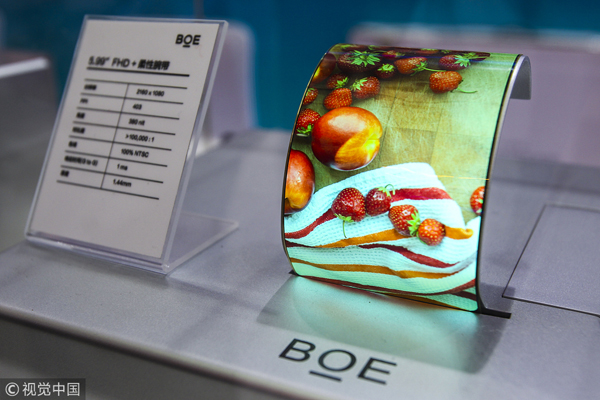 Chen Yanshun, chairman of BOE, said the company is banking on the flexible organic light-emitting diode (OLED), and shipments of OLED panels will triple to at least 70 million pieces next year.

Chen made the remarks at the company's annual Innovation Partner Conference on Tuesday in Beijing. He also noted that presently the supply of traditional liquid crystal displays has surpassed its demand, so BOE won't increase its investment in the sector in the future.

BOE has three sixth-generation active matrix/organic light-emitting diode (AMOLED) production lines. It started mass production of the panels from its facility in Chengdu, Sichuan province in October 2017. The panels have already been used by more than 10 smartphone manufacturers including Huawei, Oppo and Vivo.

BOE's Chengdu factory is expected to turn out 20 million pieces of flexible panels this year, accounting for 18 percent of market share worldwide, according to Chen.

As an emerging flat-panel display technology, mini light-emitting diodes (LED) that offer much better image quality and are highly efficient will witness explosive growth in the next two to three years and become a new option, Chen added.

"We are positioning BOE as an IoT company providing intelligent interface products and services for information interaction and human health," Chen said, while noting the company focuses on display and sensor devices, smart systems and healthcare services.

IHS Markit, a market research firm, expects BOE to be the world's largest supplier of AMOLED display panels this year, with shipments of foldable panels set to reach 50 million by 2025.