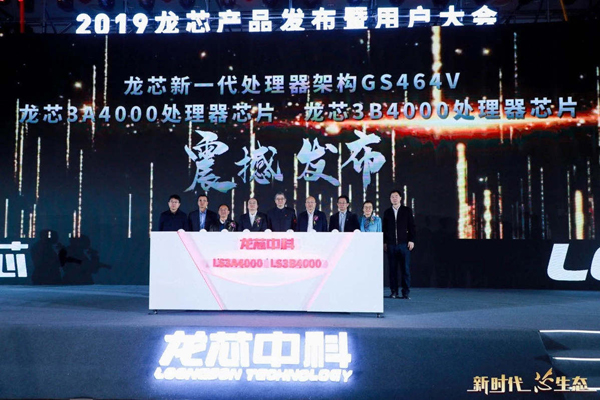 The new generation CPUs, Loongson 3A4000 and 3B4000, adopt a 28 nm technique and their main frequency reaches 1.8GHz to 2.0GHz. Their performances are more than twice that of the previous generation, according to Hu Weiwu, president of Loongson.

All the source code of the chip is independently developed, and a security control mechanism is designed in the processor core. An open-source operating system has also been developed to support enterprises. The upgrade of Loongson CPUs and motherboard will not affect the compatibility of the operating system and applications.

Hu said Loongson is taking steps to compete with international chip giants, adding that Loongson will launch new CPUs that adopt a 12 nm technique in 2020 and 2021. Their main frequency is expected to reach 2.5GHz, with the processing performance reaching world-class levels.

Loongson was initiated by the Institute of Computing Technology under the Chinese Academy of Sciences (CAS). Loongson chips have been applied to China's space program, finance, energy and other fields.

Loongson is trying to establish a new information industry ecosystem and statistic shows that Loongson chip shipments have reached more than 500,000 in 2019.

Zhou Dejin, an official from the CAS said Loongson has mastered the core technology of CPUs through independent research and development after 20 years' effort, showing its determination in building an independent and innovative information industry system.