Realme, the world's fastest-growing smartphone brand, aims to enter 90 percent of the European countries and regions by the end of this year, as it steps up a push to pounce at the opportunities of 5G handsets and the internet of things. 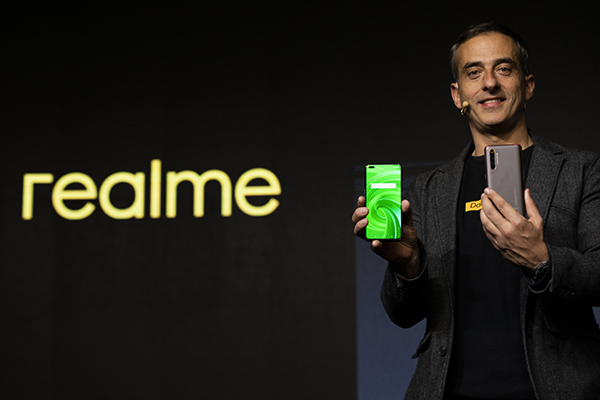 Though Realme is still relatively new to the smartphone game, its meteoric rise has been raising eyebrows. Created in the middle of 2018, the brand has quickly emerged as the fourth-largest smartphone vendor in India and its products are now available in 27 countries and regions.

After shipping over 25 million units of smartphones in 2019, the company eyes a 100 percent year-on-year growth in shipments this year. To achieve the goal, one crucial task is to expand its presence in Europe, where consumers prefer premium, cutting-edge products.

"We excel in internet marketing and we boast good products. Once we find appropriate local partners, we can quickly crack a market," Li said in an exclusive interview with China Daily.

According to him, Spain is currently the company's European focus. Last October, the company held its first official European product launch event in Madrid. Just one month later, on Nov 25, the first day of the Black Friday shopping spree, Realme X2 Pro became the sales champion on Amazon Spain. Currently, the company is already the fifth-largest smartphone vendor in Spain.

"We are also partnering with a string of Spanish chain retailers to sell our smartphones offline. And we have gone through several rounds of talks with major local telecom carriers for cooperation. Very soon, we will announce a deal with at least one Spanish carrier," said Li, who did not disclose more details.

The senior executive now spends 30 percent of his time in Spain and the rest traveling across other European countries. Li said by the first half of 2020, the company will take actions, such as holding branding events, in the open market of basically every European country.

But the biggest challenge still lies in localization. The European smartphone market differs considerably from Southeast Asian markets, where the company had already established itself as a competitive brand loved by young consumers.

"But we have worked hard to have a better picture of local consumers' product preferences, and scrambled to localize our products and marketing strategy," Li said.

For instance, compared to Asian consumers, most of whom are selfie enthusiasts, European buyers are not big fans of beautifying themselves when taking pictures with phones. Such a difference motivates the company to adjust its smartphone software.

'We are considering launching tailor-made smartphones for Western European consumers. We will also localize our marketing team to cater to local culture," Li added.

The comments came after Realme unveiled its latest 5G smartphone model Realme X50 Pro 5G in Madrid in February. Priced from 599 euros ($699), the new model is powered by the US tech giant Qualcomm Inc's Snapdragon 865 chip, and comes with a sleek screen, flash charging and fancy design. It is the first 5G model Realme brought to Europe.

"Though a little bit later than China, Europe sees faster 5G development than Southeast Asian countries. In the second half of 2020, Europe will see more shipments of 5G handsets and we aim to be the tech trendsetter," Li said.

Realme's European team currently has dozens of employees. It is working to expand and localize the team to better meet consumers' growing demand for its products.

"We will hire senior country managers from local people to take charge of each market. The manager will be the core in planning local marketing. Localized teams will help us rapidly move forward," Li added.

In the meantime, Realme said it will unveil more than 20 IoT products powered by artificial intelligence this year, to satisfy consumers' desire for smart home devices. Most of such products will also be available in Europe.

"We want to hear what consumers really want, and try our best to match our products with their demand," Li said.